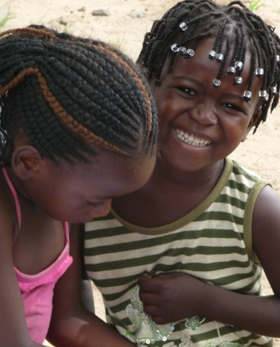 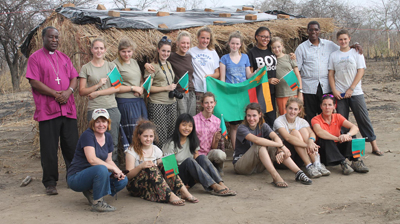 "We don't just want to fundraise but we want to come to Zambia and help build a school", said the Headmistress of St Mary’s Calne in the UK. Wow, what a response to my enquiry on behalf of the Anglican Street Children's Programme (ASCP) and Bicentenary initiative.

Father Katete, ASCP Director, was delighted… his dream of a school for vulnerable girls and orphans in Chama might soon be realised.

Chama is a remote rural area in north-eastern Zambia, where there are still child marriages and no opportunity of secondary education for many girls.

Two weeks ago, I waved off St Mary's team (14 A'Level pupils and two staff) from London's Heathrow. They had given up their half-term holiday to come out here to help make a difference to the lives of the children in Chama.

Their excitement was palpable, rucksacks brimming with sleeping bags, mosquito nets and bare necessities plus a huge kitbag of footballs and other sports equipment for the children. Everyone was hugely looking forward to the trip.

Chama is so remote that many village chldren had never seen a muzungu before. Primary school children abandoned their classes to rush out and greet the visitors, closely followed by their teachers.

Thanks to an extremely generous £10,000 donation, plus the £1000 St Mary’s girls themselves had raised, everything was ready and waiting. Cement, piping and other materials, along with baked bricks donated by Chief Tembwe were transported from Lusaka and Lundazi.

The girls from St Mary's are a tough, enthusiastic, hard-working bunch and progress was fast, despite the intense October heat. Local villagers abandoned their planting to help. Soon foundations were laid and walls built using bricks made by the new brick machine, which is so cost-effective that it has halved the cost of the school build. Finally… the roofs were raised.

The Bishop of Eastern Zambia came to visit the site, inspect the bricks and meet the villagers. So, too, the District Education Board Secretary and along with Chief Tembwe they were all delighted with the progress.

By the time the St Mary’s Calne girls left, an ablution block was completed and a 24-bed dormitory near completion. Next up, four classrooms… then the school can open. What a day that will be!

The new Chama girls’ school will also be called St Mary’s to cement the relationship between the two schools.